Ever since I was a young girl I looked forward to going to Sweden.  My beloved grandfather, Erick Nordeen,  came from Sweden in the early nineteen hundreds at age 19.   My paternal great grandparents, Alex and Anna Bjorklund, emigrated from Sweden to a farm near Princeton in the 1880s.  Although there was never much talk about it, I always wondered why my ancestors left their country and members of their family to come here.  Grandpa Nordeen knew he would never return to his homeland.  It was an expensive, long and difficult journey.  He had done it once and that was enough.  This was his home now.  He did, however, make a few comments about “home” on occasion.  If we took him to Duluth to enjoy the scenery along the North Shore or drove through rural farmlands he would quietly nod his head and say, “Just like home.  Just like home.”
Now it was my turn to travel across the ocean to Scandinavia.  My family and I visited the mountains and fjords of Norway and the beautiful city of Copenhagen.  Touring Sweden was the most meaningful for me.  Before leaving for our trip I tried to discover why so many Swedish families left home for a land they knew little about.  My grandparents never talked about their struggles.  I read “The Emigrants”  by Wilhelm  Moberg and joined ancestry.com to learn more about my family.  Farms in Sweden had become so small, as they divided them again and again to hand them down to family members, that a family could not survive on them any longer.  The church of Sweden was so controlling  that individuals were ex-communicated  for any differing opinions.  Perhaps these were part of the decision to leave.  America offered a better chance for  happiness and Minnesota felt like home.  It was sad to leave family.  The travel and transition was difficult.  In spite of it all, they were thankful to be here.
Sweden was lovely.  The small farms were well kept, dotted with red barns and red farm houses.  The rolling hills were planted with grains and hay mixtures that we would recognize in our own farm fields.  Rocky outcroppings left by the glaciers thousands of years ago and lakes, surrounded by pines and birch, dotted the countryside.  Stockholm  and the archipelago on it’s eastern edge were picturesque.  It reminded me of Duluth and Lake Superior.  Now, here I was in Sweden, wanting to say, as my grandfather did in Minnesota, “Just like home.  Just like home.”


This Thanksgiving, as I reflect on the Pilgrims’ emigration to America, I will have a new appreciation for the courage of these people who left the known and came to the unknown and for the depth of thankfulness for their new life here.  After surviving the first year in America, with the help of the Native Americans, they were not rich and they did not live in fancy houses.  They were in a difficult situation but they were thankful.  We’re blessed to have a national day that celebrates the importance of being thankful.  Blessings to you as you celebrate this year! 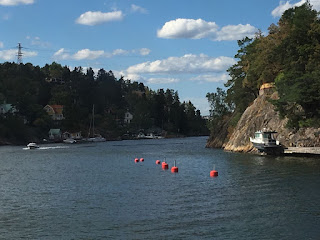