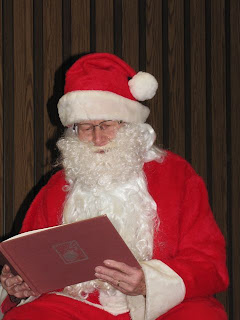 Sure enough, he came. With the jingling of sleigh bells from the reindeers' harness, Santa came to visit the children at Salem Pre School. He thanked us for our singing and for being such good girls and boys! Tired from his busy schedule, he sat down and took out a favorite book just for us. It was "The Polar Express"! He likes it because it talks about the sleigh bells and the elves and the boy who got the first gift of Christmas. The boy could have had anything he wanted but guess what he chose, a silver bell from the reindeers' harness! On the trip home the boy lost the bell through a hole in his bathrobe pocket, but Santa found it and gave it back on Christmas Eve. That boy, unlike all the others in his family, could still hear the bell ring when he was grown, as can all who truly believe!
Before he left, Santa gave each of the children a silver bell on a ribbon necklace to remind them of his visit. Many children hugged Santa. A few gave one last reminder of what they were hoping for on Christmas Eve. The Jolly Old Soul had other places to go so he scurried off. We never even saw the reindeer! Maybe next year.
Merry Christmas!
Posted by Pamela Carlson at 2:53 PM No comments: 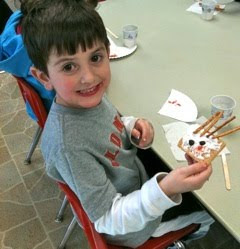 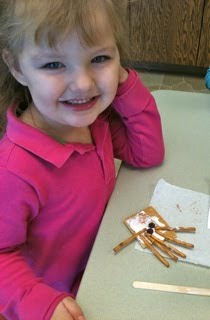 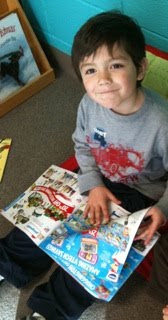 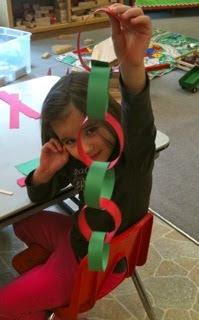 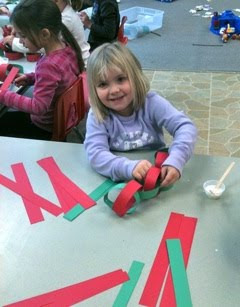 Advent is a season of waiting and at Pre School, we are waiting, sometimes patiently and sometimes not so patiently. We are waiting for Santa's arrival, the Christmas parties and family gatherings. The four year olds made Advent chains to help them wait. Taking off one ring each day helps them visualize how many days are left until Christmas! As we wait we are busy as elves making Christmas surprises for our parents and decoration for our homes. Glitter is our favorite art material in December. Have you noticed? We love to use bells when we sing many of our Christmas songs like "Jingle Bells," "We Wish You a Merry Christmas," and "Ring, Ring, Ring Your Bells."
During Advent the most important thing we are waiting for is the birth of Jesus. He is the reason for Christmas. In the book, "Santa's Favorite Story," Santa reminds us that Christmas would come without packages. It is God's gift of love, Jesus, that brings Christmas. Songs like "Twinkle, Twinkle Christmas Star," "Mary Had a Little Boy," and "Away in a Manger" help us remember the story. We are thankful for you, Baby Jesus!
Posted by Pamela Carlson at 6:20 PM No comments: