The moment Halloween is over it seems all the world begins to scurry about making preparations for Christmas.  Never mind Thanksgiving.  That gets lost in the shuffle.  If we put a few colored leaves in the pot of pine branches on the front steps that will have to do.  It’s all about decking the halls for the arrival of ……..Santa? ……..Jesus?  Sometimes it’s hard to tell.
For most of us, our Christmas season is orchestrated  down to the last song to be sung and dessert to be eaten.  We adults try to control the social calendar.  There is not time for spontaneity .  Music, shopping, baking, decorating, and entertaining must be done.  The Christmas pageant must be rehearsed and presented to the “oohhs" and “ahhhas" of the audience.  By Christmas night we are thrilled but exhausted.
Now, flash back to the first Christmas night.  It had been an ordinary day.  Mary and Joseph had been on the road all day….again.  It was difficult to find a place to stay in the bustling town of Bethlehem.  There were many families returning to this town, home of their ancestors, to be counted in the census.  The innkeeper was busy boarding and feeding his clients.  In the stable, the animals were bedding down for the night. Out in the fields, shepherds were quietly watching their flocks.
Imagine the flood of emotions that jolted the shepherds to attention when an angel appeared to them.  “Fear not,”  she said, for surely that is the first emotion that overwhelmed them.  Awe may have come next as a  “flash mob” of angels suddenly appeared in the heavens, praising God and saying,
Glory to God in the highest, and on Earth, peace good will to men.

As if this heavenly chorus was not enough, the angel told them that a Saviour, God’s son, had been born.  They could find him wrapped in swaddling clothes, lying in a manger.  Could that be true?  They left the fields and went to Bethlehem in search of the child.  Surely doubt must have filled their minds only to be replaced by joy when they found the child, exactly as the angel had described it!
The shepherds couldn’t wait to tell others what they had experienced.  We, too, know the feeling of wanting to be the first to tell.  Spreading the news, others were astonished.  Finally, the shepherds returned to the stable praising God for all they had heard and seen!


That is an amazing story.  As fun and blessed as our Christmases are, none can be more emotional then the day Jesus was born.  Fear, awe, doubt, joy, excitement, and praise enveloped the shepherds all in one day.  By Christmas night they (like all of us today) were thrilled and exhausted!  For them it was for all the right reasons.  Let’s make our Christmas more like theirs this year, with less personal control and more time to be surprised by the birth of God’s son! 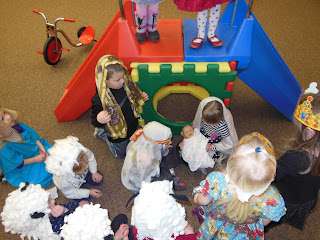 Posted by Pamela Carlson at 4:04 PM No comments: