COMO ZOO AND THE GARDEN GETS PLANTED

Our last days of school are so busy and exciting.  All of our classes had field trips last week.  The four year olds had a great time at Silverwood Park, one of the Three Rivers Parks areas.  It is located near Pre School on Silver Lake.  The theme  for the visit was "Prints in Nature."  The students looked for animal prints made by animals themselves and they made animal prints in their art sessions at Silverwood.  The weather was perfect for the field trips this year.  That made the day extra fun!
The three year old classes took a trip to Como Park Zoo May 16th.  They rode over in a big orange school bus taking along any parents, grandparents or daycare providers who wanted to join them!  They spent a sunny day looking at a hungry giraffe, a lazy polar bear, a handsome orangutan and many other animals!  It was great! 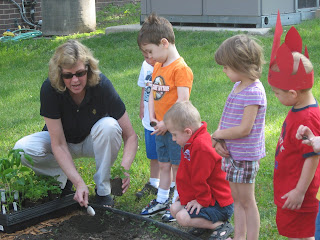 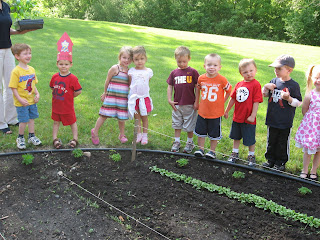 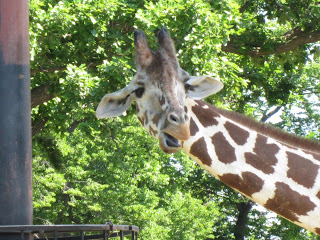 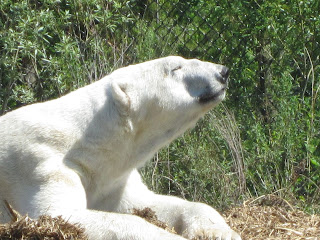 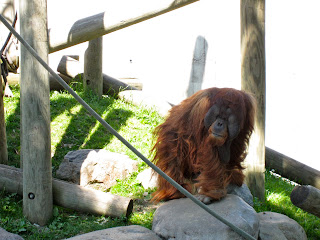 We also planted our garden last week.  School is almost over and there was work to be done!  The radishes and carrots have been in the ground for a while now.  We can see them coming up.  Many more seed were planted this past week including zinnias, pumpkins, marigolds, tomatoes, peppers, basil and corn.  School families are welcome to stop by this summer and check on the progress of the garden.  Next fall the students will harvest their flowers and produce!
Posted by Pamela Carlson at 6:25 PM No comments: 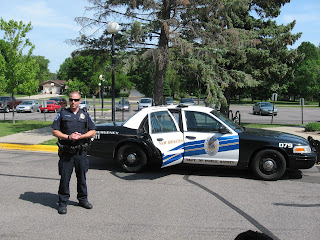 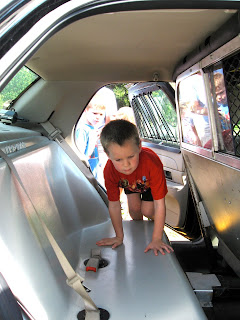 We were very fortunate to have the New Brighton police officers come to Pre School this past week.  This continues our effort to introduce our students to our community helpers who are there to help keep us safe at home and in our community.  Jen and Trevor came to remind us that they, and all of the police officers, in New Brighton and elsewhere, want to help us find our way if we are lost, help us if we are injured or sick, and keep the "bad guys" away from us.   They reminded us of safety rules such as not letting strangers into our houses and  never going anywhere with a stranger.  We talked about the rules to follow when we are crossing streets while walking or riding our bikes.
All Pre Schoolers are interested in seeing all the stuff on a police officers belt.  Officer Trevor was nice enough to show us all of them; the flashlight, the club, the rubber gloves, and the place where his gun is kept.  (We could not see the gun.  That would not be safe!)  Last of all, we got to see the police car up close with all the lights flashing.  Those who wanted to could climb through the back seat of the car and look into the front seat where the police camera and computer are located.  It was so cool!
Thank you, Jen and Officer Trevor!

Posted by Pamela Carlson at 6:00 PM No comments:

We have had a very busy week at Pre School.  Our goal was to talk about safety around fires, in the car, riding our bikes, in the water and so on.  We were very surprised to learn how much our students already knew about staying safe.  Thank you, parents, for teaching your children these important safety rules.  To reinforce some of these rules we had two community helpers come to school.
The New Brighton firefighters came to school early in the week, bringing their boots, helmets, masks, jackets and fire truck!  Children were reminded not to touch matches and lighters.  If their clothes catch fire, STOP, DROP AND ROLL.  If they are in a burning house crawl low, under the smoke.  Always go to the firefighter in a fire!!  One of the firefighters put on all of his gear, including his oxygen mask to show the students how he looks during a fire.  It's a rather scary appearance.  Knowing this ahead of time, however, takes some of the fear out of the situation.  Before they left, the firefighters showed us their fire truck.  They opened all the doors so we could see the hoses, tanks, hatchets, fans and rescue equipment.  They even flashed the lights on the truck.  THANK YOU FOR COMING FIREFIGHTERS KIP, JERRY AND TREVOR! 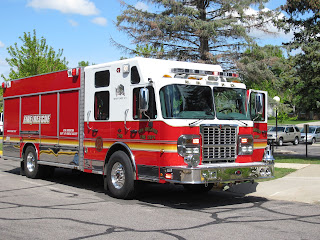 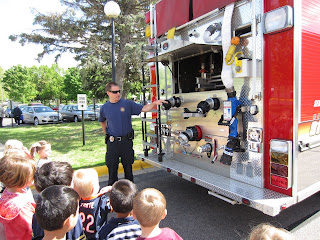 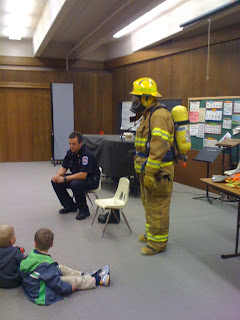 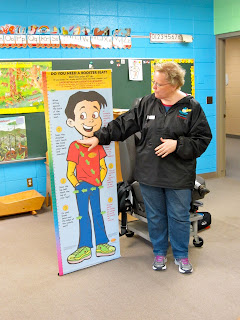 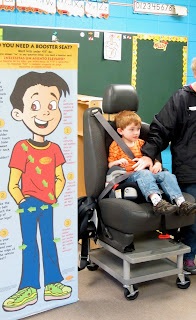 At the end of the week, Julie Philbrook, from HCMC came to school to talk to us about the importance of wearing seat belts and using car seats and booster seats in the car.  Sitting in the back seat is the safest place for children.  Ride quietly is important.  When you get out of the car, get out on the sidewalk side rather then the street side.  THANK YOU FOR ALL THE GOOD INFORMATION, JULIE!
Next week we look forward to having the New Brighton police come to school.  All of these community helpers want to keep us safe and healthy all year around!
Posted by Pamela Carlson at 7:26 PM No comments: